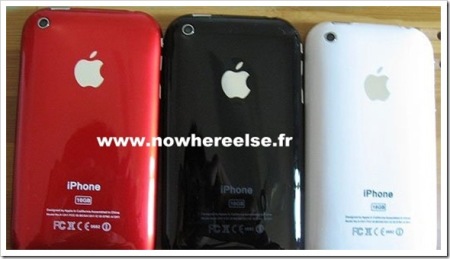 Between heaven and hell.

Toggle signature
History of the F-Word.

Id rather have a rectal examination on live TV by a fellow with cold hands than have a Facebook page. -George Clooney-
Réactions: Human-Fly, Maximouse et Maya7

Sure shot
iLife '09 and iWork '09: It's a new year and time to get new versions of the most popular software suites for the Mac. Will they migrate to the cloud with tighter integration with MobileMe? Scary thought.

Likely
Mac mini: Apple stopped Mac mini shipments to some retailers back in October. The current rumor is that the new incarnation of the Mac mini will look like the product of a night of steamy dripping sex between an iMac and a Time Capsule. For some reason, this idea turns me on.
Cinema Displays: Long overdue, the redesign of the 30-inch Apple Cinema Display, with new looks and LED backlighting, seems like a strong possibility. This has been rumored for quite a while, but after the announcement of the latest 24-inch LCD, this Macworld 2009 may be a good venue to announce a relatively low-key product like a display. Or maybe they will save this one for the new Mac Pros (which are long due for a redesign).

Hmmmmaybe
iMac Early 2009: A site called PC Perspective claims that Apple will launch new revisions of the iMac, including a crazy 28-inch model that could be a great home computer/TV (and a great work computer for megalomaniacs like me).
Both Apple Insider and Ars Technica echo this rumor, pointing out that the supersizeme iMac will use Intel's X58 chipset and an Intel Core i7 CPU with four cores and HyperThreading, which emulates the behavior of an eight-core system. On the graphics, they say to expect a dedicated Nvidia card, all tied together with a new cooling system technology. I wonder if it will have a new simplified looklike the one abovewithout the chin (thanks for the illustration, Sebastian).
My only "but" about this is the fact that Apple may want to save this one for an special event. After all, this approaches TV territory and may require its own sales pitch, not just a space in the keynote.
MacBook Pro 17: Another strong rumor this weekend has been the possibility of a new MacBook Pro 17-inch model. The new flagship (literally flagship, as you can probably sail the Atlantic on top of one) will have the same looks of the latest MacBooks and MacBook Pros.

What?
Home server: Another rumor is a home server, a grown-up Time Capsule that will centralize all your media and available through the Web via MobileMe. Sure, because the media companies, like DisneySteve's other darlingwill love that.
Snow Leopard: Given the fact that this new release is still a long time away, I don't think this will happen at all. The features we already knowwhich are quite esoteric for most consumerswere announced at WWDC. And, whatever other secret features Snow Leopard has under the hood, they won't be announced so much in advance. Specially with Windows 7 coming soon and with MS apparently back in the OS race. Wait for a Snow Leopard update later in the year.

Hahahaha. Ha
iPod Touch Pro: Some analysts are hot about a potential Apple netbook at Macworld. Jobs said they didn't want to do it because it would be crap. I agree. But he didn't exclude the possibility of expanding the iPhone/iPod touch family to fill that space, which Apple obviously sees as a computing platform with the same validity and scope of the Mac itself.
That's why I think an iPhone OS-based tablet could be a possibility. But certainly, whatever product it is, it will require its own special announcement, not a segment at the last Macworld.
Or maybe Schiller will pull it out of a magic hat just to tell the world that nobody f*cks with The Schiller.
iPhone nano: Seriously, TFSU.
Cliquez pour agrandir...